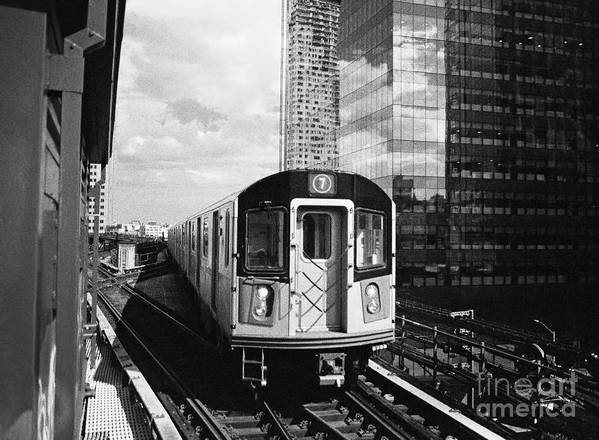 Filmic N Y C No.7 - 7 Train at Queensboro Plaza poster by Steve Ember.   Our posters are produced on acid-free papers using archival inks to guarantee that they last a lifetime without fading or loss of color. All posters include a 1" white border around the image to allow for future framing and matting, if desired.

A Flushing-bound 7 Train of the New York City Subway system departs Queensboro Plaza Station on a summer afternoon. The two-level elevated station in Long Island City, Queens serves trains of both the IRT Flushing No.7 Line and the BMT Astoria Line N and W Trains. The upper level pictured here serves outbound Flushing and Astoria trains, while the lower level serves Manhattan- and Brooklyn-bound trains on both lines. From a film image. ©2019 Steve Ember