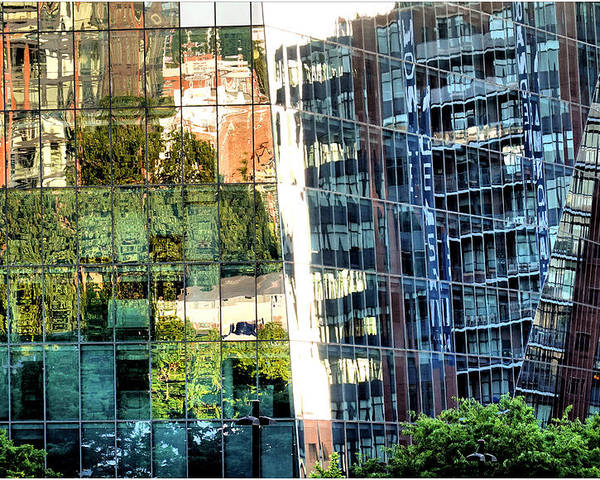 Golden Hour Reflections - A NoMa Impression poster by Steve Ember.   Our posters are produced on acid-free papers using archival inks to guarantee that they last a lifetime without fading or loss of color. All posters include a 1" white border around the image to allow for future framing and matting, if desired.

NoMa (acronym for North of Massachusetts Avenue) is a revitalized district of northeast Washington, D.C.

It also sits alongside the wide swath... more

NoMa (acronym for North of Massachusetts Avenue) is a revitalized district of northeast Washington, D.C.It also sits alongside the wide swath of trackage leading into Washington's Union Station, as well as the Metro Red Line, which serves the NoMa-Gallaudet rapid transit station.While photographing Amtrak and Metro trains along the Metropolitan Branch Trail, which runs alongside the tracks, in late afternoon, my eye was attracted to the golden hour reflections on a glass-fronted modern building in NoMa.©2021 Steve Ember