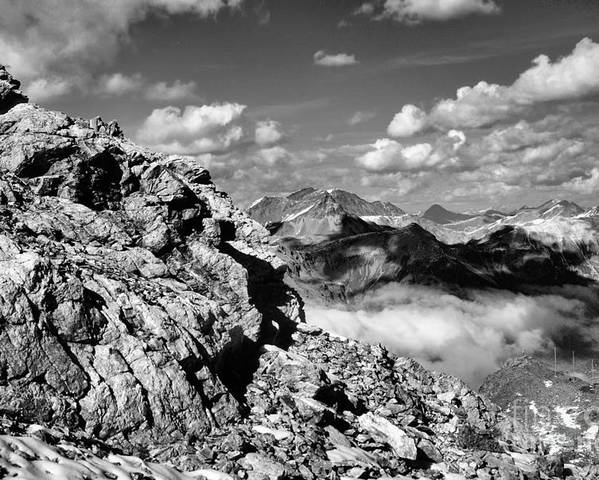 View from Diavolezza poster by Steve Ember.   Our posters are produced on acid-free papers using archival inks to guarantee that they last a lifetime without fading or loss of color. All posters include a 1" white border around the image to allow for future framing and matting, if desired.

When I stepped off the Rhätische Bahn train at Val Bernina, the base station for the cable car to the top of Diavolezza, it did not look promising... more

When I stepped off the Rhätische Bahn train at Val Bernina, the base station for the cable car to the top of Diavolezza, it did not look promising for photography, with a heavy overcast obscuring the view. But, as the cable car broke out of the clouds, smiles broke out on passengers, as the majesty of the highest peaks in the Bernina Range of Switzerland's Canton Graubünden provided a stunning autumn panorama. One can see the Val Bernina, far below, was still shrouded in cloud. Diavolezza (lit: "Little She Devil") tops out at 2,973 metres (9,754 ft). From a film image. ©2019 Steve Ember